What a time for Geocachers all over the USA!

May 26, 2018 in Cincinnati, Ohio history was made.  Over seven THOUSAND geocachers from all over the world joined in this GeoWoodStock to make it a GIGA event. We met up with TN geocachers along with making new friends along the way. Events were held at various areas throughout the state of Ohio & Kentucky.  Oh yes, it was soooo hot but we all made it though with several showers a day and with extra dry sets of clothes. 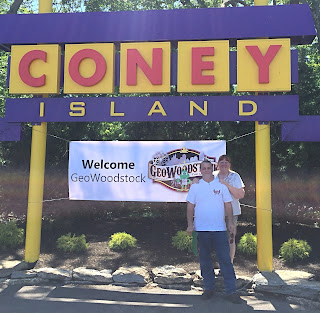 Geocachers met up about 10 am Saturday morning at Coney Island which we found out was also OPENING day for the park. Now think of this and adding seven thousands more bodies!  Vendors were set up under booths where you could purchase tags, medallions, you name it, it was sold! There was even a Scottish vendor set up.

We met this delightful couple while at one of the events. We've got an open invitation from them to come and visit......who knows! Janet is from New Zealand and John is from England....now married and both live in England.  If we get a chance to visit them......geocaching will be on the menu.  We loved to keep running into them! 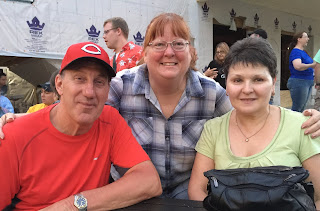 Here you can barely see the GeoWoodStock letters for all the people.
Drones took this pic.


Posted by Subriagirl at 1:06 AM No comments: 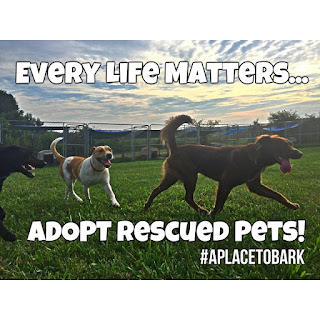 Several years ago at an Art is YOU retreat in Nashville I had the honor of meeting a woman who I had only read about & adored her artwork published in countless magazines & books.  A group of us artists loaded up on a van & traveled to the middle of no where......where A Place to Bark is situated in an idyllic setting with land as far as the eye can see.  Located on 25-30 acres of land sits A Place to Bark rescue which on an extra busy period houses slightly over 100 animals.  When I met Bernie I found her one of the most genuine of ladies I've ever met with one of the largest hearts I've ever seen.  Most days the rescue has volunteers but there's Bernie in the thick of it all. There's always so much work to be done but very little time. If everyone saw how hard Bernie works to save countless lives you'd be donating your coffee money ($10 unless you're a heavy drinker...ha) to this very worthwhile cause.  Bernie does what I can't do so I gladly donate for her to be able to save as many lives as possible.  To do this and do it right, you would have very little social/art life --Van was stunned to learn that Bernie didn't even own a television set!  Bernie has no time for TV.  Her mornings begin before dawn and end way after midnight.....and that's on a good day!  This is how I became to know Bernie and have donated to her rescue monthly without fail.  For the last 2 years my art club "Artistic Stampers" has had a Christmas in July where gifts are wrapped & brought by each club member. Members shout out happily out-bidding each other on the nicely wrapped packages to raise money for A Place to Bark. You'd be surprised at how much can be raised this way!
Although my heart ached for my sweet girl of 14 yrs, my Sammy grieved deeply.  I never realized how deeply dogs could "feel".  Van & I witnessed it first hand.  Sammy withdrew and was so lonely.  I reached out to Bernie and she took my hand.  Bernie is an extremely busy woman so between my schedule & hers, Dec. 17 of 2013 we arranged to meet up at a vets office to check out some dogs.  Van & I wanted a smaller statured dog, easier to bathe, pick up, etc.  We were introduced to Viva, a chi/fist mix and about 4/5 years old. She's been a blessing in so many ways.

Viva came home with us after Sammy decided she was the one he'd be able to play with & keep company with.  Sammy slowly emerged out of his grieving process to let Viva into his heart.  They began playing with each other & Sammy taught Viva many things, one of which was how to use the doggy door!

April of this year we realized there was something wrong with Sammy. After doctors here in Jackson couldn't pin point his problem, I again called upon Bernie who again took my hand.  I met her wonderful vets at the Gallatin Animal Hospital in Nashville. After giving him a through exam which included: a full blood panel, ultra sounds, and state of the art xrays, the vet came in to tell us it wasn't good news. In fact the news was about as bad as it gets. Sammy had several huge cancer masses, one was almost as big as his bladder & the other mass was in his spleen. Vet said Sammy may have 6 months at most to live. Van & I were totally devastated. You always hope it's a problem that a month of medicine can cure but this cancer was extremely aggressive. As much as it hurt to watch Sammy use the bathroom we knew in our hearts he would never make it a month much less six. The spleen cancer is what the vet said would likely kill him if we didn't choose to let him go easily.  Bernie called me after leaving an animal control....I was so choked up I could barely talk to her. She had just left animal control (loaded up with precious lives who will LIVE because of Bernie) and was driving an hour out of her way to meet up with Van & I.....Bernie wanted to meet Sammy.  She did.  :-)  We couldn't take the chance on losing Sammy in a painful way so two weeks after this devastating news, we arranged to take Sammy to our vet to have put to sleep peacefully.  August 3, 2015, we took Sammy for his last squirrel run at Jackson State Community College.  We then headed to Hardees where we bought Sammy his very own burger which he loved woofing down....then it was time to work our way to the vet's office.  Sammy crossed over the rainbow bridge at 4:15 p.m. where I'm sure he was met by Subria, his little momma. He & Subria have been cremated & put on a shelf of family honor in our home.  They were amazing members to our families.  Never to be forgotten.

Bernie reached out to me with this text: "Ronnie, when you are ready, I have a baby for you."   While my heart still aches deeply for Sammy, I knew Viva now needed a little partner to keep her company. Sept. 26 around 5 p.m. we arrived at "A Place to Bark" with some much needed items plus money to give to Bernie towards her rescue efforts.

When Viva heard all the barking I'm sure she began having flashbacks of her time just before we adopted her. But she was a trooper!  Bernie had over 100 dogs & we just about met each one of them.  Some snapped at Viva, some didn't acknowledge her at all.  Then Bernie opened a gate to let one little dog out. Viva & he met up, tail to nose, tails began wagging fiercely.  Viva had made her choice.  We brought the little fella with us.
We stopped in Hermitage to stay the night. We were dead tired & it was raining. A precious friend of mine (my second daughter), Sherri Sickler, met us at the hotel with a kings feast of food. While the food was great....her friendship is priceless. We talked for what seemed like hours about art, pets, family.......the whole nine yards! If Van & I weren't so tired we could have talked another 2 hours! Sherri is our ice cream partner!  We rarely fail to eat ice cream somewhere when we hook up.
Posted by Subriagirl at 1:56 PM No comments: 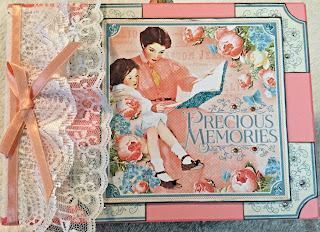 Attending Trace Creek Crops provides me 24 solid hours of creating.  In July I bought the Graphic 45 paper packs along with all the chipboard pieces, etc. to work on my daughter's Baby/Accomplishment book. I will have pictures put in at random from birth to the present moment.....sort of a celebration of her life accomplishments.  The paper pack provides paper for both boy/girl so I'm currently working on my son's mini album as well!  A two-fer!  Gotta love that!  I'm going to add quite a few pages but I'm also going to include a YouTube link for you to actually SEE the album pages and how they work. Lot's of magnets in this album! I might also add that I got carried away with the page designs that the book will be a challenge to fill up with pictures & still be able to close to some degree. If you choose to see the video.....bear with me, it's my second ever but have been getting great advice from some experts in the field on shooting YouTube videos. The next one will not be hand held, I promise!  My inspiration for some of the pages (book cover design/envelope pocket pages/some pages themselves) came from Kathy Orta, who is an amazing book maker! 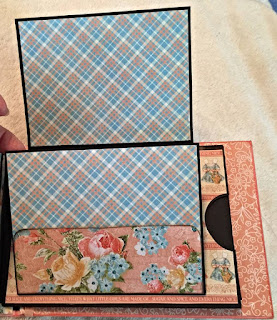 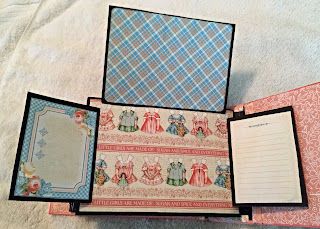 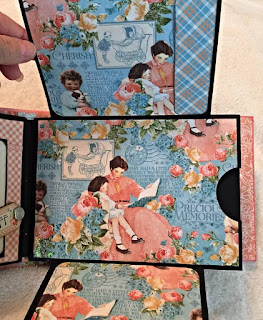 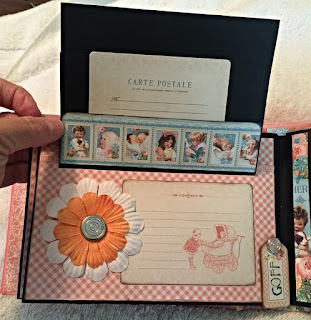 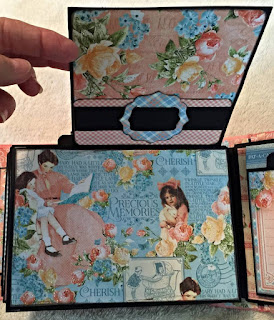 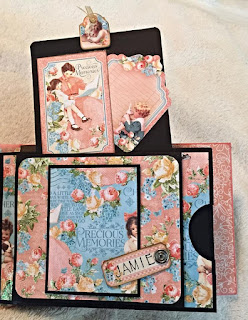 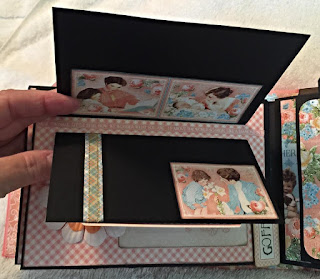 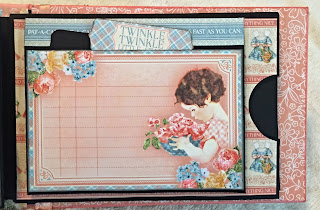 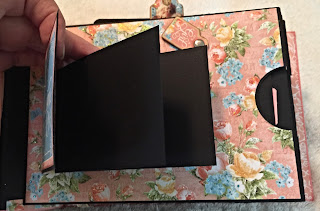 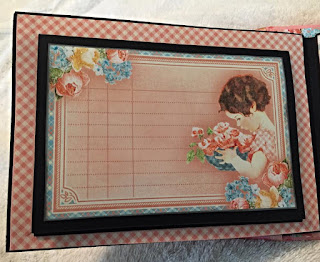 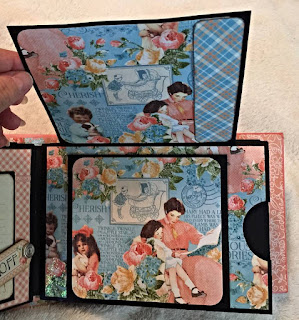 If you've stayed with me throughout all these pictures & were tempted enough to view the video, God Bless You!  As I stated before, I'm currently working on my son's mini album. I hope to have both done by Christmas 2015!  I will fill up mostly but leave them room to finish up their life accomplishments as they far out-live me!  The Graphic 45 paper pack: Precious Memories is not glittered....I add Stickles glitter where you see the sparkles along with the front page containing Swarovski crystals. Now for my son's book.....not so much bling!  ha  Have it his way it'd be full of little skeletons!  I'd love to see your comments below!!
Posted by Subriagirl at 9:47 AM No comments:

Subriagirl
Jackson, Tennessee, United States
Over the years my life has evolved into many facets of art in one form or another. I am a photographer, a mixed media artist and a book maker.

All material on this site are the intellectual property of Veronica Goff and protected by the United States copyright law. All rights not expressly granted are reserved.